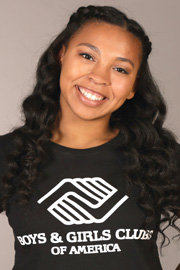 Boys & Girls Clubs of America has named Jocelyn Woods National Youth of the Year in a ceremony held at the National Building Museum in Washington D.C. She accepted the honor before an audience that included members of Congress and Boys & Girls Clubs of America partners and supporters, including Club alum and American Ballet Theatre principal dancer Misty Copeland, Grammy Award winner and actress Ashanti and comedian JB Smoove.

“The Club has always been my home; a place that I could count on to feel safe and supported by people who love and care about me, even when the actual place that I lived did not meet those standards,” said Jocelyn Woods, 2016-17 National Youth of the Year, Boys & Girls Clubs of America. “As National Youth of the Year, I want to make sure kids and teens across this great nation know that there is a safe place, like a Boys & Girls Club, in their local community where they can learn to lead, succeed and inspire.”

Through the support of her Boys & Girls Club, Jocelyn became a leader in multiple arenas of her life. When Jocelyn joined her Boys & Girls Club at age five, it gave her something priceless – a place to call home. Living in a community where drugs, crime and gangs were rampant, Jocelyn found stability behind her Club’s blue door. It provided her with positive, caring relationships with adults who showed her that her present did not have to dictate her future.

Jocelyn learned computer coding skills at the Boys & Girls Clubs of Silicon Valley, helping her secure internships and even coding her own photo sharing app. She has also dedicated herself to helping teens who are struggling with the same issues she faced, going so far as to spend a week in the Tenderloin District of San Francisco to better understand homelessness. She also founded the Under-represented Teen Advocacy Program (U.T.A.P.), a nonprofit that connects Bay-area teens in need with available services.

Jocelyn plans to study Journalism at University of Southern California and become a journalist, lawyer and entrepreneur.

“Jocelyn symbolizes the ultimate youth experience with Boys & Girls Clubs, and we are so proud to name her National Youth of the Year,” said Jim Clark, president and CEO of Boys & Girls Clubs of America. “Together, we can create opportunities for youth just like Jocelyn, to enable all kids and teens to achieve a great future. Jocelyn and so many of our Club alumni represent all that we do as an organization to help youth and we know that she will be a voice and advocate for the needs of all young people in our country.”

“Disney is especially proud to support Boys & Girls Clubs of America to encourage young change makers to embody the values of leadership, service and excellence,” said Kevin Callahan, vice president of Corporate Citizenship at Disney. “We draw inspiration from the next generation of dreamers and doers, as they envision a brighter tomorrow and aspire to make their dreams come true.”

As Youth of the Year, Jocelyn will serve as the official spokesperson for Boys & Girls Clubs of America and its Young Alumni & Friends Club that connects former members who are living proof of the impact of Boys & Girls Clubs. Within the next year, she and the five other National Youth of the Year finalists will go to the White House for an exclusive meeting with President of the United States in the Oval Office.

For more information about the Youth of the Year program, visit www.youthoftheyear.org.